Every David has its Goliath. Everyone knows this story of the underdog who conquers his invincible opponent. In part one of this series the story of Tim Wolvetang.

Tim Wolvetang was on the podium of the Austria Extreme Triathlon 2018, a more-than Ironman-distance triathlon with 4,000 vertical meters during the 210 kilometer long bike course and another 1,900 meters of climbing on the marathon. With a – as it turned out – bent femoral artery. In the fall of 2019, Tim underwent medical surgery. After a year of revalidation, the problem was not resolved. Riding in the triathlon position was no longer possible.

Time to change course. The new goal: a marathon. One that is not preluded by a swim and a bike ride, as triathletes are used to. I ask Tim what is his goal. ‘Sub-2h48’. Because the hip angle remains open during running, his running has improved after the surgery. I fact-check whether I am correct his 10km-PR is somewhere in the 39 minute range. ‘Indeed’, replies Tim, ’39:02 to be exact’. Ran with the then still-kinked artery, which led to early local tiredness. ‘That is ambitious, but possible. It requires a couple of months of focused training. That means no crazy adventures for the time being’. Tim has the peculiar desire to hop on his bike at 6AM in Rotterdam where he lives, look at the flags to see which way the wind is blowing, and then enjoy a tailwind-supported long ride that lasts until the sun sets. The winds may blow him 300 kilometers further, and make him end up in the north of Groningen, or somewhere in Germany, from which he travels back home by train.

We have this talk mid-December 2020. Two months earlier Tim did an exercise test and had excellent scores. Seven out of eight energy systems are active: he is highly trainable and fit. 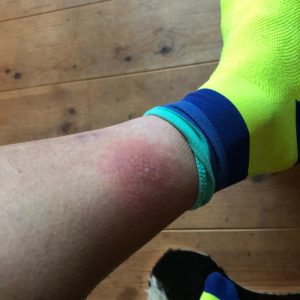 In October, Tim gets a tick bite during a bikepacking trip through Europe. A few weeks later he finds out he contracted Lyme disease which requires him to undergo a severe antibiotics treatment. He slows down his training and then picks it up again, but notices far-too-high heart rates during his easy runs. He can run maximum one hour at the pace which he has proven to be able to sustain for 12 hours. Tim is seriously off.

We repeat the lactate test. It shows the effects of the tick bite: his aerobic systems, which are the most important for running the marathon, have become inactive. I call Tim, who has just moved to Switzerland to work  as an anesthetist. ‘I have good and bad news’.

‘Start with the bad news’.

‘You can train for a maximum of one hour a day for the next three weeks. Easy. That is necessary to reactivate your aerobic foundation.’

Tim, who prefers thirty-hour training weeks over weeks of six hours, lets the news sink in. ‘Well well. So what is the good news?’

‘That makes you eventually faster’.

Tim, who is blessed with a body that responds quickly to training stimuli, adheres strictly to his new training diet. During our weekly calls he reports to feel better and better. In November he ran 4:48/km at a HR of 155 (which is his West Coach Challenge-HR); at the end of his ‘reset-period’ he has already improved to 4:30/km. ‘You are heading in the right direction’, I tell him when we call again.

Part of the marathon preparation  is a ten kilometer, at the end of February, and a half marathon early April. Due to corona, there are no races in Switzerland. Tim has improved week after week and is anticipating his ten kilometer like a kid who cannot wait to celebrate his birthday. ‘I’ll run it on the track’, Tim says decidedly, ‘together with Daan (de Groot, the European Champ duathlon who lives around Tim’s corner) and who’ll run a 5km. The gentlemen concoct a ‘from-hunter-to-hare’ race. Daan will hunt Tim during his 5 kilometer, trying to lap Tim. He then recovers for some laps and proceeds with being the hare for the remainder of Tim’s 10km. The plan is ambitious: a 35-er. Besting his PR by more than three minutes. In the afternoon of 27 February Tim sends an app. ‘Meep meep. 35:22!

Two weeks later, Tim’s mood is different. ‘Saturday I gravelbiked for almost three hours. The next day I did a long run of 24 kilometer. Now my shin is hurting. And not just a little bit.’

‘We pause the running and you do everything on the bike. Also the intervals’. One week non-running turn into two, after an unsuccessful test run that lasts exactly 500 meters halfway the first week. Tim remains calmer than me. In the third week Tim apps: ‘Had a nice run. The legs feel reborn!’

We go back to the drawing board, also because we are informed that the Muttenz marathon, the goal race, has been cancelled. Tim decides to run the half marathon on the track instead of on the marathon course which was the original plan. He runs it on 10 April, in 1:22.16. ‘I think I could have pulled that one through to the full marathon’. Tim declares it in a quiet, self-assured tone.

We discuss when and where Tim will run his marathon. ‘We stick to May 2. The date we already planned. On the track, so there will be no dispute regarding the distance, wind advantage or net downhill running or whatever.’

I explain this time span will not allow for the long runs I would have liked Tim to do. ‘I’ll make you do what  is necessary to have you at the start line fit and ready. You are light, and you know how your legs can feel after thirty k’s of hard running. We’re going for it’. I log into TrainingPeaks to review Tims build-up towards the marathon. He averaged 58 kilometers per week with a maximum of 74 kilometers and a longest run 24.4 k. He also did two to three cross-training session: cross-country skiing, hiking the mountains, or gravel biking.

Tim runs his marathon Sunday night 2 May. On the trusted taak, which is shining with rain. His second half is less than two minutes slower than his first half. Tim apps me the screenshot of his watch. 2:45:08. And on Instagram he shares the photo of his secret to endure the final kilometers. Suggesting it was just Swiss chocolate that made him do it.