How does an exercise test help you run faster? In this blog I show you how regular testing helps you get better results from your training. First you see what data an exercise test yields. Secondly, I explain how to train smarter and more effectively with the results of an exercise test. The crux is translating the numbers into an individual training schedule. The third step is consistent and specific training. Fourth you see how you use the results to run better in the races.

1. What data does an exercise test provide?

Periodic exercise tests are part of 3in1Sports coaching. This is done according to a standard protocol, so that tests are comparable. During the test, the run speed is increased by 1 km/h every six minutes, until exhaustion. Per step, the speed, heart rate, lactate and wattage (Stryd) are recorded. Based on these results, the training zones are determined: heart rate zones, speed zones and wattage zones.

By testing periodically, you can see how an athlete develops over time. Below the ‘raw’ data of two tests. (More tests have been taken in the meantime. I do not show them to keep it simple).

First, you see that the heart rate drops in the lower speed zones. The second, even more important conclusion: (much) less lactate is produced in all zones. That means this athlete has become aerobically much more efficient. That is what you want, as a long-distance athlete.

This aerobic improvement came at the expense of anaerobic capacity, shown by a decrease in maximum lactate production. This however can be trained much faster (4 to 6 weeks of specific intervals) than becoming ‘more efficient at the bottom’ (which takes months to years).

The graph below clearly shows that much less lactate is measured at the same speed. That means the aerobic system has become much more efficient. 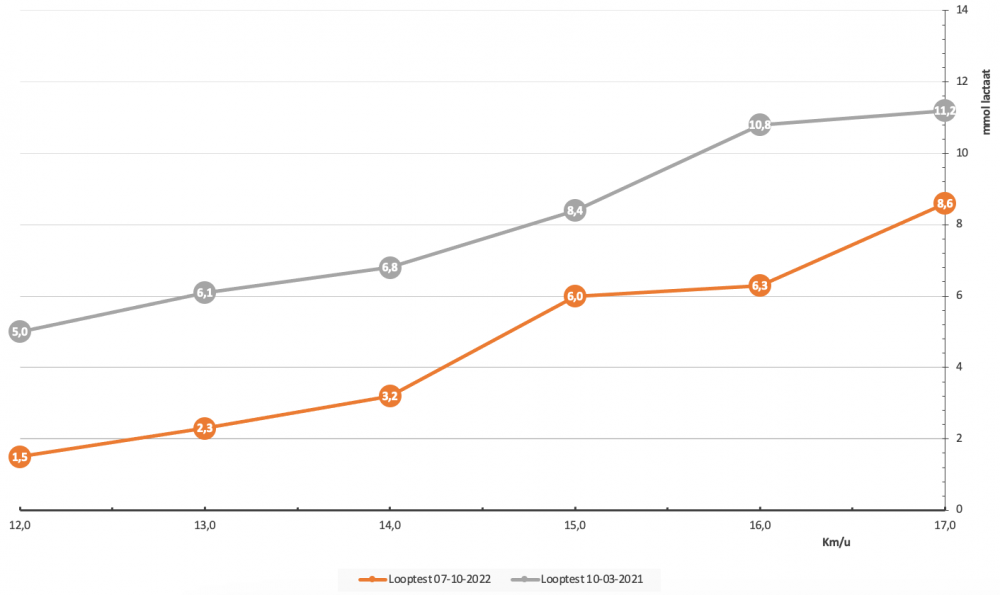 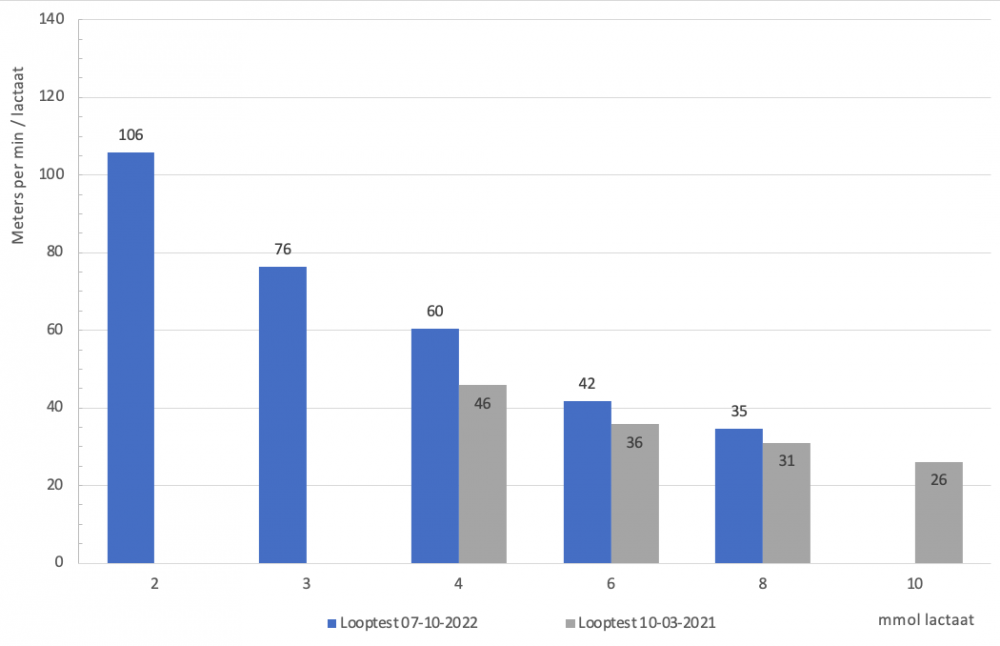 The horizontal axis shows the lactate value. If you see a score for a lactate value, that system is active. If you do not see a score, that system is not active. The vertical axis shows the number of meters per minute / lactate. This way you can see what speed you achieved during your test on the same lactate value. The higher the bar, the higher the speed. At the left side of the metabolic profile are the systems in which energy is mainly produced aerobically. The right-hand side are the energy systems in which more and more energy is produced in an anaerobic manner. For a long-distance athlete, you want the aerobic systems to be active, and to be as efficient as possible.

During the first test (gray bars), this athlete had four systems active. These were systems that had a relatively high anaerobic proportion. Not exactly what you want for someone doing races of more than four hours. After a year and a half of consistent training, the metabolic profile has profoundly changed. During the second test (blue bars), five systems are active. Those are exactly the systems you want to get ‘up and running’: the dominant aerobic systems.

Running faster with an exercise test only happens if it makes you train smarter. The key question is: do you train differently after an exercise test? If not, then apparently the test was of little value. (With one exception: you already trained perfectly;) Regardless if that was a breath gas analysis or a lactate measurement – that’s for another article. Regardless of whether the test was a gas exchange analysis or a lactate measurement. That is for another article. The way it typically goes is that you receive a beautiful report of your exercise test in your mailbox. You read that carefully. Some things you understand, others you don’t. Maybe you adjust training zones.

Provided that the calculated training zones are not so wide that they are practically not applicable. Too often I see exercise tests with training zones of 20 to 30 heartbeats wide. Or, in terms of speed, of 3 or more kilometers per hour and power zones wider than 50 watts. At the bottom of such a zone, you are guaranteed to provide a different training stimulus than at the top. Whilst training the right energy systems is precisely the main goal of an exercise test.

If the training zones are correct, the next step is to translate the results into a training program. The person writing the trainings should be able to explain these four W’s: Why, When, and in What order you do Which workout.

To run faster with an exercise test, you first need regular exercise tests. That test must be translated into a training program that is tailored for you. By ‘tailored’, I don’t just mean individual heart rate and speed zones. How your aerobic and anaerobic systems relate to each other is also input for your training schedule.
Now that you have a specific, individual training schedule, it’s up to the athlete. It ultimately comes down to implementation. The athlete is responsible for that. The adage: just do it. Train as the program has been drawn up. The only way to know if an exercise program is effective is to follow it. If you don’t have results after that, the one to blame is your coach;)

Personal Coaching is important for implementation. The person who has designed the training plan must be able to explain the purpose of the trainings. Each session is a piece of the big puzzle that will be put together on the day of your competition. The better the puzzle pieces fit, and the better they are laid out (read: the more accurately a training is carried out), the greater the chance of success. The trick is to take into account all things that life throws at you. A human being is not a robot. Illness, private circumstances, weather conditions and other matters must be taken into account in the implementation. Consistency is key here.

Ok, you now run faster in your exercise test. That is nice, but this is not the ultimate goal. That is what you run in the races. In real life. The data of this blog are from Raymond de Kuiper. During his last marathon (Amsterdam, 10-16-2022) his goal was to run a PR. That was 3h08, run during the 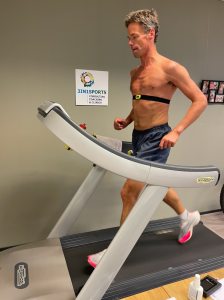 Rotterdam marathon on April 10, 2022. The race plan was based on the last exercise test, nine days before. Open the first half marathon in 4.25/km. With good legs, keep that pace until km 30 and then accelerate.

Raymond was still on the pink cloud of his PR in Challenge Almere and really wanted to run under three hours. He also started with that ambition. The first half felt so easy that he opened in 1h28. That was too hard, resulting in a very tough second half marathon. That went in 1h42. The finish time: 3h14. We’ll never know what would have happened had the race plan been followed;)

“You can’t go faster than you can,” I said in the debriefing. ‘The test doesn’t lie’. “But it felt so good at first!” After which I heard someone laughing loudly on the other end of the line. And self-deprecatingly told about the overconfidence with which, he admitted, he had started.

In the end, there is no better exercise test than the reality of a competition to tell you what you really are capable of.